It’s not a 4-game winning streak, but the Warriors and Eagles can both feel pretty good about a 3-3 tie in Surrey on Friday.

Both squads had a ton of momentum heading in, and both might feel a little (and maybe even equally) hard done-by not to earn the win.  Then again, Surrey may have been lucky to take an early lead, while the Warriors may have been fortunate to have stayed alive as the game wore on.

West Kelowna was certainly the better team in the first period.  The Tribe seemed to adjust immediately to Surrey’s Olympic-sized ice, and transitioned wonderfully throughout the opening stanza.  Shots were 12-6 West K. in the first, but thanks largely to Michael Santaguida (and some shots off the mark) the Eagles remained unscatched.   With just 20 seconds left in the frame, the Eagles buried one against the flow when Drew Best slid a back-door pass to Kevan Kilistoff.  Kilistoff’s redirection hit the post, but Brett Mulcahy knocked in the rebound for a 1-0 Surrey lead.

The first chance of the second period was a short-handed breakaway by Shawn Hochhausen.  However, Santaguida made a lovely glove save on the chance – one of many he purloined over the course of 70 minutes.

Surrey then began to surge, and for much of the second period the Warriors were on their heels.  The Eagles got an even-strength marker when Brady Shaw walked out from behind the net and stuffed it underneath Tyler Briggs.  But for the rest of the period (including four Eagles powerplays) Briggs stood tall, keeping the Warriors in the game.  Actually, he was dynamite for the rest of the game and sprinkled in some stunners late in regulation and into OT.

Down 2-0 heading to the third, the Warriors got some life when a fortunate bounce gave Matt Anholt an open net three minutes in.  The Eagles would regain the two-goal cushion when Adam Tambellini set up Brady Shaw for his second of the game on a Surrey 2-on-1.

Facing one of the stronger defensive groups and perhaps the best goalie in the BCHL, things were looking bleak for West Kelowna.  However, the Tribe dug deep and forged two massive goals.  The first came from Marcus Basara on a mid-period powerplay.  Reid Simmonds then tied things up when he jammed in an Anholt centering feed with five minutes remaining.

Late in the first overtime, Surrey would be given a powerplay on a slashing call against Danny Gayle.  However, Shawn Hochhausen and his PK mates showed great resilience in killing off the full two minutes and extending the game.  And with chances both ways in double OT things wrapped up without any more scoring. 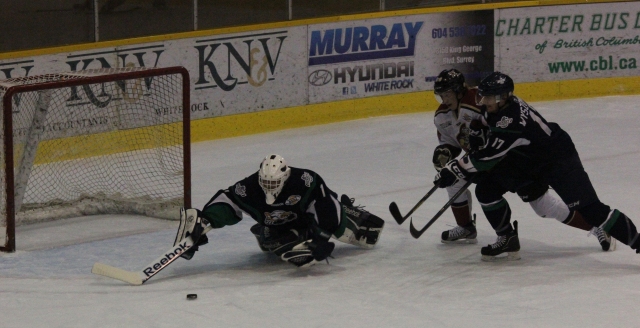 I spoke to Matt Anholt after the game, and he agreed with my belief that the Warriors still have plenty of momentum coming out of this one.  This team is starting to get better and better in close games, and coming from 2-0 and 3-1 down is a great character showing.  And let’s face it, these are two good teams – and sometimes a tie against a valiant foe is a good result.

Click here to listen to my interview with Matt Anholt.

It is crazy that West K. has three ties this year.  A tie is always so unlikely in this league.  But I admit, a part of me was hoping we’d get OT on that ice surface.  The Eagles may regret letting the lead slip, but they didn’t give it away, and were also a few great Briggs saves from prevailing.

Best of all, the Birds swoop over to RLP for a rematch on Saturday night, giving both sides the opportunity to settle the score and to keep moving forward in their respective playoff races.

This entry was posted in Uncategorized. Bookmark the permalink.